Jumping for joy after another great year!

2016 seemed to be a down year for celebrities (RIP Bowie, Prince, Alan Thicke, etc.) but Branch Out was only getting more lively with our most successful year to date!

Some of the many 2016 highlights for Branch Out include:

And of course, it’s all thanks to you, dedicated LEAFlet readers. Oh and also all the other donors, participants, volunteers, sponsors and supporters but for just this second, you LEAFlet readers get all the credit. Thanks for reading!

MS On Ice: Full of Glitz and Glamour

Overheard at the event “I feel like Jack at the first class dinner on the Titanic.”

Everyone was a star at the Calgary Flames Foundation’s MS On Ice. Over 300 people attended, including the entire Calgary Flames roster and their wives. Live music, incredible food and drinks, live auction… mingling and partying. It made for an incredible evening.

It also raised $115,000 to be split between the Calgary Flames Foundation an Branch Out!
Thanks to that money, Branch Out’s created a special $50,000 grant dedicated solely to MS research! Top Alberta neuroscientists can apply by Jan 31st HERE.

Johnny Cakes are like pancakes, but made with cornmeal. It’s also the title of an episode of The Sopranos. Regardless, they’re a hot commodity!

If you haven’t registered for the 2017 Branch Out SnowShoe (BOSS) Tour, get on it! This year’s event is totally new and is going to be rad! There’s an ice slide, an’ mulled mead an’ Fallentimber Meadery is hosting and it’s gonna be SO COOL! Register HERE.

And while June is a ways away, the Branch Out Bike (BOB) Tour is already filling up! Don’t get dropped from the peloton (biker slang) – get registered! HERE!

He’s not the type to get all emotional on you but Jordan is a guy with a heart three, maybe even four sizes too big.

A former Hobey Baker candidate (see: really good at hockey) Jordan’s career was changed forever by an MS diagnosis. Now the goaltending coach for the Calgary Flames, his battle with MS continues on and off the ice.

After connecting with the Branch Out Foundation, Jordan gathered his resources, worked his networks and helped put MS on Ice in action. The event raised $115,000 and created a special grant just for MS research.

He’s not the type to take credit, but he certainly deserves it. For being the catalyst to Branch Out’s ‘coolest’ fundraiser, Jordan Sigalet is our Glial Guy of the month! 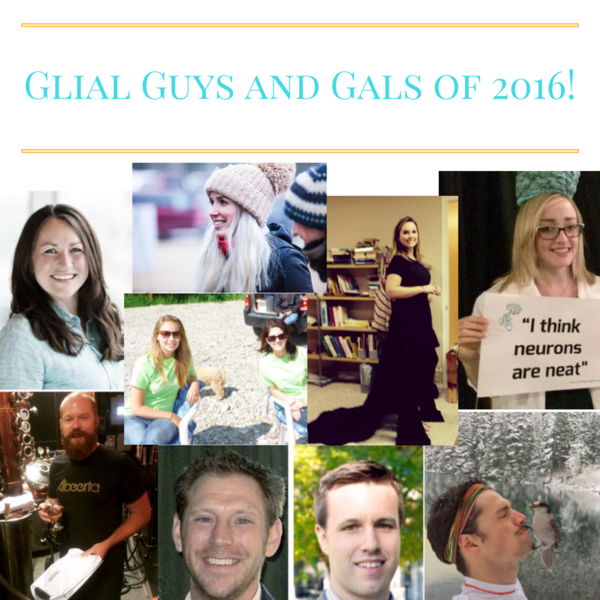 Look at this fun group of care bears!

It takes many big brains and big hearts to make Branch Out such a success. Each month we’re able to highlight one person in the “Glial Guys and Gals” section of the LEAFlet. Please take a look at our blog highlighting the 2016 Glial Guys and Gals!

What year was Harvey the Hound introduced as the Flames team mascot?

P.S. You also win a Neurons are Neat card. Way to go!

Let’s get heavy into anatomy! These are the parts of the neuron that carry information away from the neuron's cell body to other cells. They can measure up to 1 meter long: